The completed solar installation on the roof of the Olympia Timberland Library.

The Olympia branch of the Timberland Regional Library installed 33 solar panels were mounted on the building’s roof. The solar panels produce enough free energy from the sun to power the lighting in the library. The installation was part of a larger energy and water conservation effort by the City of Olympia, LOTT, Puget Sound Energy, Washington State Department of Enterprise Services and Ameresco. Soon the Olympia Library will have information about the system posted inside the building as well as a link to real-time energy production on their web page.

The solar project came about because over 4,000 City of Olympia residents signed up for Puget Sound Energy’s Green Power program. In return, PSE gave the city a grant to install panels on the Olympia Library. 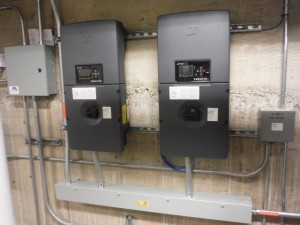 The project remained as local-loyal as possible. South Sound Solar, an Olympia company, was chosen by Ameresco to work on the solar design and installation of the panels. MC², Inc. an Olympia engineering firm did the engineering reports on the library roof. Both the panels and the inverters were made in Washington.

“We were very excited to work on a project that affects our city and state so positively,” says Kirk Haffner of South Sound Solar. “The City of Olympia did a lot of work to figure out how they could benefit from State and Federal incentives for their municipal projects.”

Typically, solar projects on public sites have been done using private investors, through the community solar program. Private investors get the incentives and the public site — a school, office, building, or park — benefits from lower electricity bills. For the Olympia Library, the City of Olympia found a way to keep the incentives in the city’s economy, maximizing the benefits in a way that community solar never could. 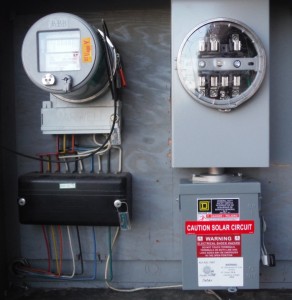 As a municipality building, the City of Olympia qualifies for the state solar incentives, processed through the production and net meters. The Library’s electric bills go down.

Like the funding process, installing the solar panels on the library’s roof was a collaborative effort. South Sound Solar spent time determining the best system options for the city’s goals and budget. “There’s a balance between function and affordability,” says Haffner. “The good thing about solar panels and solar hot water is that today’s technology enables us to give pretty accurate estimates on performance and return on investment. This makes the planning and budgeting process much less complicated.”

Ameresco and South Sound Solar worked with the city and the library to find the best design and installation options. They went for a 8250 watt system mounted with weighted ballasts to minimize penetrations in the roof. “Our numbers show the library will save over $800 a year in electricity costs,” says Haffner, “and the city will receive $4000 a year in incentives from the state.” The system is also designed to be expanded in the future.

The challenge for South Sound Solar was working around the library’s schedule to make sure there was minimum interference with the staff’s schedule. “We did have to turn power off one day. This is not normally something we have to do but it was an efficiency and safety issue. No one wants to mess with that,” says an employee at South Sound Solar. “The next day we sent our crew in an hour earlier than their usual shift to make sure the library had their power back on. We wanted to make sure it didn’t interfere with the anyone’s visit to the library.”

“This is what solar is about,” says Haffner. “We want to see cities and municipalities investing in savings. The state Department of Commerce is offering grants for public projects like the library in 2014. We hope that every city can do something similar.”

There are no upcoming events at this time.